An 84 year-old widow has been forced to wash herself in her sink for three months, after her local council failed to fix her broken boiler. 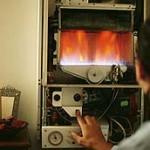 Despite repeated attempts by the council, which saw them send out repairmen on no less than fourteen separate occasions, Nessie Rennie of Aberdeen hasn’t had enough hot water to have a shower or even wash her dishes for three months, after her central heating system stopped working.

Mrs Rennie, who has lived in a flat in a housing complex in the city for ten years, contacted her local council to get the faulty boiler repaired, but is at her wits’ end after council workers repeatedly failed to remedy the problem.

Charity Age Scotland said that Mrs Rennie’s battle for hot water was ‘completely unacceptable’ and she was being left to live in ‘medieval conditions’.

Mrs Rennie’s grandson Paul says it is disgraceful that a woman of 84 is being forced to sponge herself clean in her living room because of the council’s failure to do its job.

Mrs Rennie had been given the chance to shower at a neighbouring flat six weeks after the water went off, but she said she refused on principle as she wanted the problem solving in her own home.

Aberdeen council are still investigating the faulty boiler: “We apologise for the inconvenience caused to the resident and will send maintenance staff to the property again to investigate,” said a council spokesman.