In the UK, a van is broken into every 23 minutes. This is a shocking statistic that shows how vulnerable tradespeople are to van tool theft.

Unfortunately, van tool theft is an ever-growing problem for tradespeople. Those who fall victim not only have to replace their tools but are also left unable to work until the tools are replaced and their van has been repaired.

What does the law say about van tool theft?

Under the Theft Act 1968, a maximum sentence of 7 years can be given to someone found guilty of breaking into a van. In addition, anyone found with the equipment needed to carry out the crime, could be handed a 3 year sentence. The sentence given in each circumstance will depend on the decision arrived at by the independent court.

A number of campaigns – including NoVANber in 2018 – have called for harder punishments on those found guilty of van tool theft but sadly none of the petitions have gathered the 100,000 signatures needed for the subject to be debated in parliament.

While the Novanber campaign didn’t get the required signatures, the government did respond, saying: “The Government takes these crimes very seriously. There are robust penalties in law to deal with theft and we are supporting the police to explore what more can be done to tackle stolen goods markets.”

Van tool theft isn’t a recent problem for tradespeople and there are some shocking statistics surrounding the crime:

A final point to note is that most van crimes are committed on a Thursday, see how van tool theft differs day-to-day with the table below. 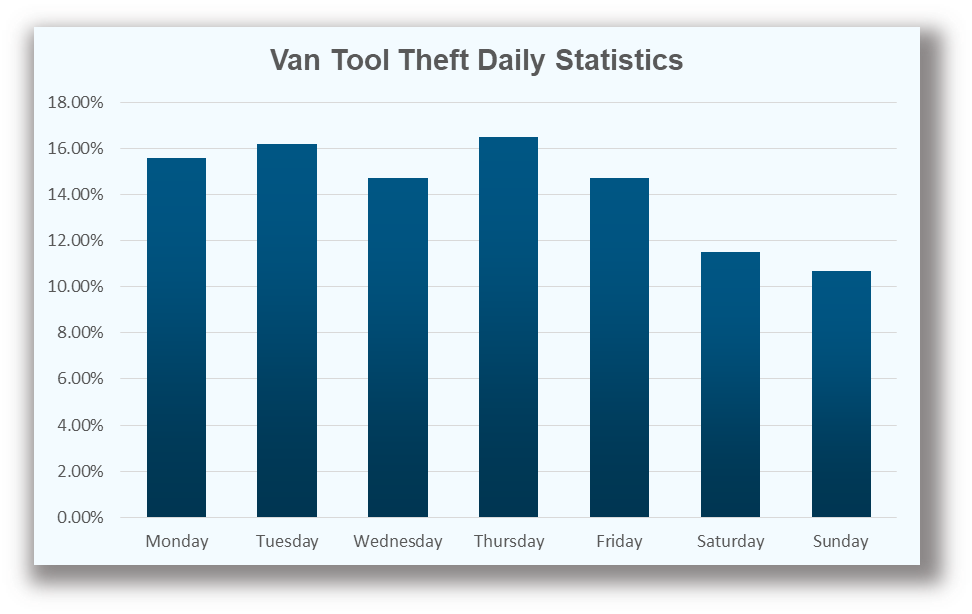 Which areas of the UK are most at risk of van tool theft?

Sadly, van tool theft happens right across the UK but some areas have proved more susceptible than others over the years.

Simply Business conducted some research that found the 10 areas in the UK most at risk. Take a look at the table below to find out if the area you work in made the list with the table below.

Take your tools in at night

If you have a lot of tools (which you probably do) then this is likely to be easier said than done. Nevertheless, if you’re able to take just some of your most precious tools into the home with you at night it will help prevent them getting into the hands of criminals.

Instructing your employees to never keep tools in their van overnight might not stop criminals breaking into the van but it will certainly reduce potential losses.

Fit a safe into your van

Should a thief make their way into your van then having an additional layer of protection, in the form of a safe, could help to prevent them from stealing your tools.

Applying police-approved forensic marking solution – which becomes visible under UV light – to your tools can help to deter thieves.

Invest in a steering lock

For some thieves, it’s not enough to get away with the tools, they’ll target the van too. Fitting a steering lock whenever you leave your van (day and night) will help to prevent any thieves from getting away with the van.

In some cases, thieves will aim to drill their way through the locks of the van and simply fitting protection plates around the locks, which can be relatively inexpensive, around the locks can be enough to prevent someone from gaining access to the van.

Remember to insure your tools

No tradesperson wants to think about their tools being stolen but the statistics show that van tool theft is unfortunately an ever-growing concern for tradespeople. So, making sure that you’re covered will help you get replacement tools so that you can get back to work sooner rather than later.

As well as taking out insurance, it’s important to remember to hold onto receipts when you buy any new tools. That way you have hard proof of the tools that have been stolen.

Find out more in our
Tool Insurance Guide for Heating Engineers.

Unfortunately, van tool theft is an all too common occurrence in the UK, with tools being stolen from a van every 23 minutes. Which is why making sure that you’re covered by tool insurance is vital. Tool theft is not only an inconvenience, it prevents tradespeople from working and earning a livi […]

Van tool theft is an ever growing concern for tradespeople up and down the UK and a new social media campaign has been launched to help fightback: #noVANber. The main aim of the #noVANber campaign, running throughout November is to generate the 100k petition signatures required to get the issue […]

When you need a new tool it’s easier than ever to order online right there and then, but have you thought about the benefits of paying a visit to your local independent tool supplier? Not only does being surrounded by tools help you to make a more educated purchase than through a phone, you can […]

As a plumber, it’s important that you’re covered by the right insurance. While you’ll find that not all forms of insurance are legal requirements, that doesn’t make them any less essential. Taking out the right plumber insurance could save you from having to make a payout with your own money. We […]
Previous Next