Airlock in Pipes? Here's How to Clear It

An airlock in pipes will either prevent hot water from leaving the taps or leave your radiators cold. Airlocks happen when air gets trapped in the hot water or central heating system. This then prevents hot water from circulating properly.

In this guide, we'll take you through how to clear an airlock in the central heating system.

What is an airlock in your pipes?

Airlocks happen when air is trapped in the system. This air forms a blockage which gets in the way of the hot water as it makes its way to the taps or the central heating system.

Signs of an airlock in pipes include:

How to clear an airlock from hot water system 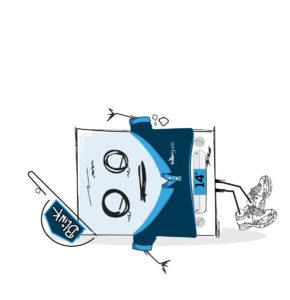 If you're turning the hot water tap and nothing is coming out then it's time to take action. There are 2 ways to remove air from the hot water system and we talk you through them both below.

To do this, you'll need:

Step 3: Turn the cold water tap on for 3-5 seconds and then turn it off.

Step 4: Run the hot water at a sink in another room.

If the hot water is working, you've successfully cleared the airlock. If not, then you might want to try the second method.

If the hose pipe didn't do the trick it's time to try this second method.

Step 2: Turn on all taps, beginning with the top floor and then working your way downstairs, and wait until the water stops flowing.

Step 3: Flush all toilets until no water is left too.

Step 4: Turn your taps until they're almost completely off so that a small amount of water will be able to get through.

Step 5: Turn the water supply back on.

Step 6: Turn all taps until they’re halfway open and then open them up all the way.

Following these steps should force any trapped air out of the system, allowing the hot water to flow again.

Should neither of the above methods work, then it's time to contact a professional heating engineer.

Cold spots on a radiator – particularly at the top – are a strong indication of an airlock in pipes. This is because the air is acting as a blockage, stopping the hot water from circulating around the radiator effectively. Before long, you'll find yourself turning the heating and putting additional strain on your boiler.

Fortunately, clearing this trapped air is simply a case of bleeding the radiators. You can do this safely yourself and all you need is: 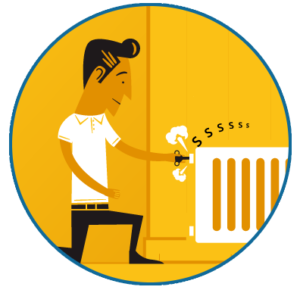 Step 1: Turn off the central heating and wait for it to cool all the way down

Step 3: As you turn, you'll hear a hissing sound which is the air escaping. Once this sound ends water will trickle out so turn the valve clockwise to lock the valve. Avoid doing this too tightly.

Follow this process for all of the radiators around your property. Once you've finished, check the pressure gauge on your boiler (it should be around 1.5) and make sure there's no sign of leaking.

For more information, take a look through our Guide to Bleeding a Radiator.

Cold radiators can also be caused by a build-up of sludge in the heating system. To clear this, you will need to arrange for a qualified heating engineer to perform a powerflush.

Find a heating engineer to clear an airlock

If you've given clearing the airlock your best shot but still aren't getting any hot water, then it's time to contact a heating engineer.

A heating engineer will start by finding out that an airlock is actually causing the problem and then, if it is, clear the trapped air from the system.

You can get free no-obligation repair quotes from up to 3 Boiler Guide approved heating engineers based in your local area by completing our simple online form. Comparing multiple quotes will give you the highest chance of finding the best deal for the work.

Get FREE quotes from heating engineers near you.