How much does a new boiler cost? It seems that the answer will be impacted by where you live in the UK.

There are several factors which will impact the cost of a boiler replacement including the type and brand of boiler you're installing, the complexity of the job (i.e. how long it will take an engineer to complete), the size of boiler you need (e.g. how many bathrooms you have) and the time of year that you have the boiler repair or replacement carried out, i.e. you can often find cheaper deals in summer.

However, it's often stated that your location in the UK will also make a difference to the overall cost. But if two identical boiler installations were carried out on the same day in the same amount of time, but in different regions, would there really be that much difference in the cost?

To find out if where you live in the UK really makes a difference to the cost of a boiler replacement, we analysed a sample of over 5,200 gas combi boiler replacement quotes provided between October 2017 to April 2019.

Each quote was provided by a UK Gas Safe engineer on our network of approved installers and given to a homeowner who had requested boiler quotes through the Boiler Guide. All our enquirers then receive up to 3 no-obligation quotes to compare so they can make the best choice for their home and budget.

Here is what the data reveals about where in the UK homeowners are paying more for their gas combi boiler replacements. 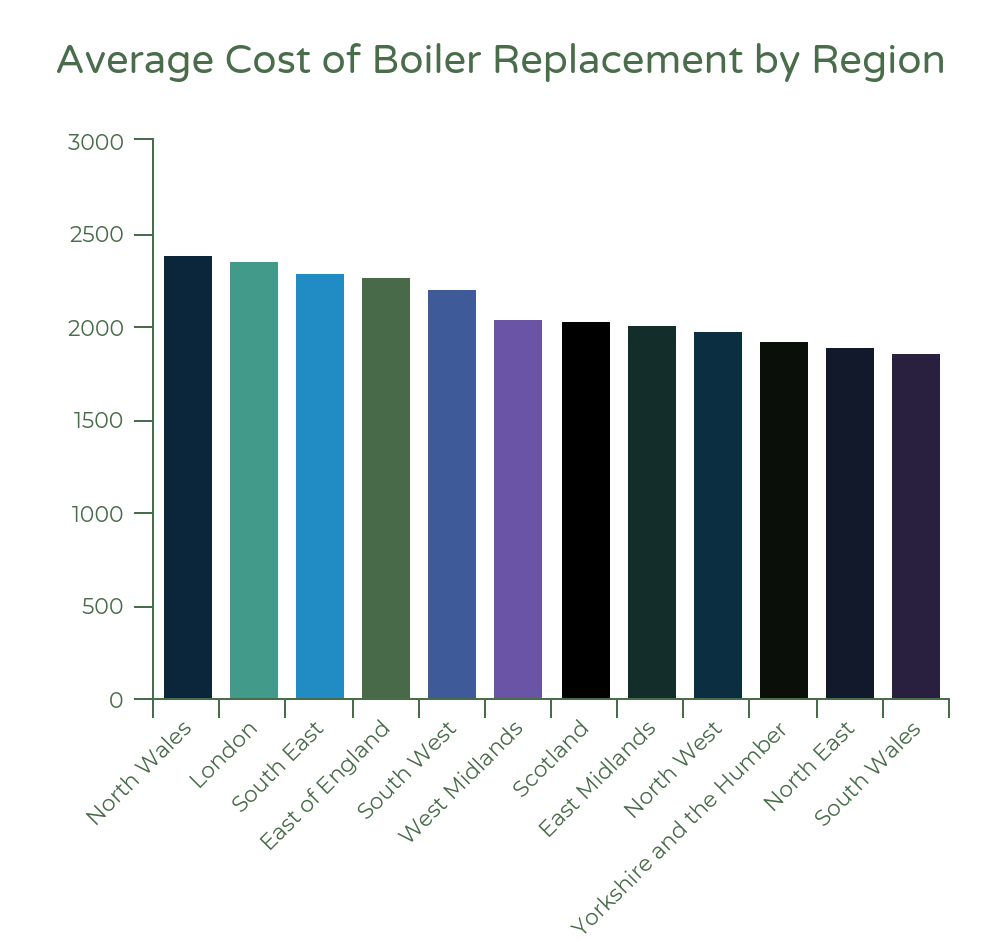 The highest boiler replacement cost is in… North Wales

Rather surprisingly, the highest average boiler replacement cost was found in North Wales and not in London as we expected to find it, although London came a close second. So why is a gas boiler so costly to replace in North Wales? It's difficult to know for sure, but there are some possible reasons.

While it's well known that London is the most expensive place to live in the UK, it's also the most densely populated area with in excess of 8.85 million living there in 2018. When there are more people, there are more homeowners and more gas engineers which makes for a competitive marketplace.

In stark contrast, North Wales is sparsely populated with under 700,000 people living in a rural, rugged and mountainous landscape. With so few inhabitants living in isolated communities, engineers will need to be less competitive with their pricing. In addition, a large portion of the population is living off-grid, so oil and LPG boilers and heat pumps are the more common heating system. With so few inhabitants and a very small demand for gas boiler engineers, those that do service the region can charge more for their services.

The lowest boiler replacement cost is in… South Wales

Interestingly, while North Wales came out at the pricier end of the scale, South Wales is the cheapest region for boiler replacement cost. This makes sense when you consider that both the average wage and cost of living in South Wales are amongst the lowest levels in the UK, so while people in South Wales tend to make less money, they also have a higher disposable income. In fact, the cities of Cardiff and Newport are in the top 5 UK cities for annual disposable income with an annual average of more than £10,500.

Why such a difference in cost?

The relatively small nation of Wales takes up the two extremes of boiler replacement cost, but is there a clear reason for the divide? It may come down to population density again. North Wales is home to the Snowdonia National Park and is generally more mountainous than South Wales and, as a result, there are just 700,000 people living in the north of the country. For example, the largest town of Wrexham had a population of 136,126 in mid-2018.

The biggest cities in Wales – Cardiff, Newport and Swansea – are all in the south and it is in these regions that the rest of Wales' 3 million people live. There are also much better transport links in the south of the country and it's also home to the 197-mile South Wales Gas Pipeline which is the UK’s largest high-pressure gas pipeline. This may account for the higher prices in North Wales as gas engineers in the south will be in greater supply and will need to be more competitive in their pricing.

How much does a boiler replacement cost near you?

Aside from the Welsh results, the rest of the boiler replacement cost statistics appeared to meet our expectations largely due to the regional differences in both wages and living costs. The highest prices were found in London and the South East, moving up to the East Midlands and East of England, over to the West and finally reaching the lowest prices in Yorkshire and the North East, with Scotland appearing in the middle*.

According to research by the Centre for Cities in 2018 the highest salaries are in London, with an average weekly wage is £727 followed by cities in the South East with average wages of at least £600 including Reading Milton Keynes, Cambridge and Oxford. The lowest average wages were found in Yorkshire (followed by the North East and North West) where workers in Huddersfield are paid £424 per week on average and £436 in Wigan.

*We did not include Ireland in your analysis as there too few quotes to draw any conclusions.

Get the best deal on your new boiler

Whether you live in London, Wales or anywhere else in the UK, the easiest way to get the best deal on your new boiler is to compare quotes from multiple installers. Only by comparing at least 2-3 different companies (including their customer feedback) can you be sure you're getting the right professional advice and a high-quality service at a competitive price.

Complete our simple enquiry form today and we'll put you in touch with up to 3 Gas Safe and approved engineers in your area. Each will provide you with a free no-obligation quote for a boiler repair or replacement. All you need to do is choose which – if any – is the best deal for you.