At Boiler Guide we help thousands of people every year to find the best heating solution for their homes. We do this by providing a quick and easy way to find and compare quotes from trustworthy Gas Safe heating engineers.

We're so pleased to have helped so many people since Boiler Guide began back in 2003, but we wanted to find out a little more about them. To do this, we analysed 10 years of boiler enquiries to find out which regions in the UK requested the highest numbers of boiler repairs to find out where boilers are most and least likely to be 'on the blink'.

A note about the data: Some UK regions are more densely populated than others so to simply compare the number of enquiries from each wouldn't be a fair comparison. To make sure our findings were proportionally representative and accurate, we checked with the Office of National Statistics for the total number of households in each region (as of June 2019). We then looked at how many boiler enquiries came from each of them to calculate the number of enquiries as percentages. This gave us accurate but very small numbers, so we finished by multiplying all of them by 10,000 to get our final results for comparison.

UK region with most boiler breakdowns in 2019? 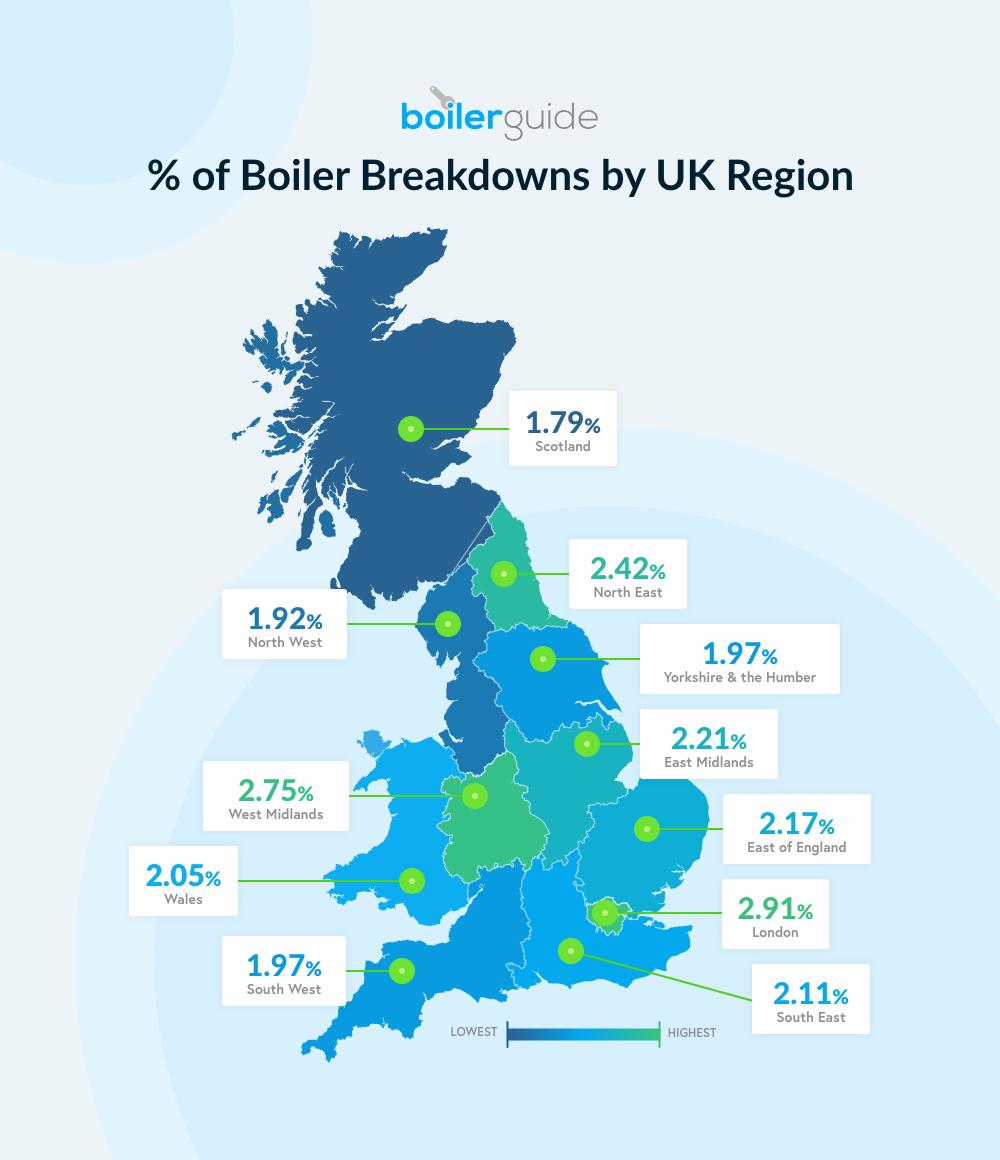 The highest number of boiler repairs were needed in London with 2.91% of the capital's households requesting boiler repair quotes in 2019. London was closely followed by the West Midlands at 2.75% and the North East at 2.42%.

Boilers are least likely to break down in Scotland with just 1.79% of households placing boiler repair enquiries followed by the North West at 1.92%.

What can we learn from the results?

For the most part the number of boiler repair enquiries per region in 2019 supports the findings of the 10 year study. Londoners are reporting more boiler breakdowns than anywhere else. It's worth noting that it is not because London has a higher number of households as this was taken into account when the data was standardised.

It may be due to the fact that London has a lot of older housing stock with antiquated heating systems, as well as people living listed buildings who face restrictions when trying to update their heating.

Lots of homes of multiple occupancy

It is also our biggest city with lots of homes of multiple occupancy which could mean boilers are placed under more severe strain than the average residential property.

London is in the south which means that on average it experiences a higher than average temperature than the north. You might assume that this would mean Londoners would use their heating less, but actually leaving boilers completely inactive for longer periods of time can cause the system to stagnate and blockages develop, causing more repair issues.

In London it is more common for people to be renting their home than to be homeowners. In fact, according to a survey carried out by the Resolution Foundation in January 2019, London has the lowest percentage of homeowners at just 37.2%. This may lead to more boiler breakdowns as the responsibility for servicing, repairing or replacing the boiler falls to the landlord rather than the tenant. Tenants are less likely to carry out routine maintenance or to report small problems until it breaks down completely and may not live in a property long enough to notice changes. Owner occupiers are financially responsible for the boiler and so may be more inclined to take care of it.

The West Midlands and the North East follow London in terms of the high percentage of renters, and they are also the regions with the next highest numbers of boiler repair enquiries.

The report also found there was a clear link between hard water areas and the frequency of boilers breaking down. London, the North East and the West Midlands, are supplied with hard water and placed the highest number of repair enquiries. Hard water contains minerals like magnesium and calcium which leave behind deposits and over time will cause the buildup of limescale. When limescale accumulates in central heating pipes, it can cause blockages which restrict the flow of water and lead to poor efficiency and breakdowns.

Interestingly, Scotland, the North West and Yorkshire are supplied with soft water (which is more acidic and therefore contains less minerals) made the fewest boiler repair enquiries in 2019.

The results revealed that just 1.79% of properties in Scotland reported problems with their boiler in 2019. As we have stated Scotland is a soft water area which may be a contributing factor to why boilers may be more reliable there than in the rest of the UK, but is there any more to it?

On the contrary, perhaps this only means the Scottish are far better prepared for the cold weather and therefore take better care of their heating systems? They may be better at keeping on top of routine maintenance and annual servicing by a professional because a boiler breaking down in the middle of winter is more problematic for a Scottish household. Or, perhaps, Scottish people are more comfortable with the cold than the rest of the UK and so do not place as much demand on their heating system!

How to prevent a boiler breakdown