District heating systems deliver energy, that’s generated in a single location, for central heating and domestic hot water to a number of residential and commercial buildings in a particular area.

What is district heating?

Properties connected to a district heating system have heat for central heating and domestic hot water delivered through insulated pipes – much like electricity, gas and water. The heat, usually delivered in the form of steam through well insulated district heating pipework, is generated from a single centralised power source.

Simply put, there's almost no end to where the energy could be potentially be supplied from – there are even plans for heat from the London Underground to be used to heat properties in the capital.

It's possible for storage systems to be added to the network to help meet demand during peak times.

The difference between district and community heating

District heating is often mistaken as being the same as community heating (or communal heating), and vice versa. There's a key difference that it's important to know:

Delivering heat to properties through a heating network comes with a number of benefits, particularly if the heat would otherwise be wasted – such as through CHP. And not only would it be good for the environment, in terms of lowering carbon emissions, homeowners would experience some direct benefits too:

Not only does installing a network of pipes to deliver heat to existing properties have its own challenges but there's every chance that property owners would have to foot the bill. Even the promise of lower energy bills and a smaller carbon footprint would be unlikely to persuade everyone in a single area to agree.

With gas and oil boilers to be banned from new build installations as of 2025, district heating could be one of the potential alternatives. However, it's looking more likely that hydrogen boilers and heat pumps could be the home heating solutions for homes of the future.

District heating systems in the UK

Most of these networks are located in England, with 25% in London. With targets in place to reduce carbon emissions, this number could be set to increase as the government wants 17% of heating to be provided through district energy by 2030. This would mean that 8,000,000 consumers would receive heating via district energy. 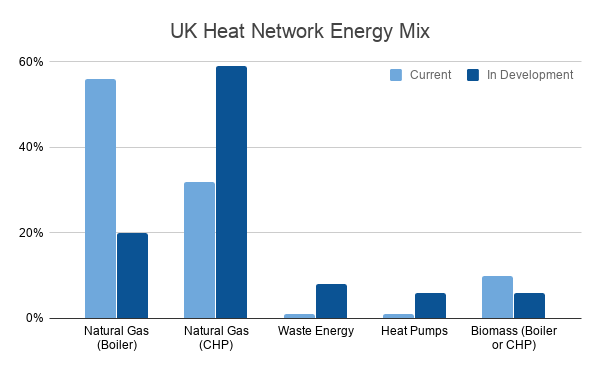 Despite growing investment in district energy, many areas of Europe are still well ahead of the UK in terms of district heating.

Take Copenhagen, for example, the capital city of Denmark. A massive 97% of the Danish capital is supplied with heating via a district heating system since being set up in 1984. It is now one of the world's largest district heating systems and uses waste heat from electricity production that would otherwise be sent into the ocean. As a result, residents are saving money on their energy bills and 203,000 tons of oil is saved every year which is equivalent to 665,000 tons of carbon dioxide.

Is district energy the future of home heating?

District heating systems clearly hold a lot of potential which has been recognised by the UK government who have launched a Heat Networks Investment Programme in England in Wales worth £320 million.

However, joining a district heat network is a big commitment for consumers and it's still very much a grey area in the UK. Connecting to a district heating system isn't like switching suppliers, it's a long-term commitment and don't currently have to meet regulations set by energy regulator, OFGEM.

With so many benefits on offer including lower carbon emissions and energy bill savings, a change in the way district energy is regulated, making it easier for consumers to commit could come sooner rather than later.