Hydrogen fuel cells can be used to generate electricity in a more environmentally-friendly way to burning fossil fuels.

As a by-product of that generation, heat is also produced, which can be harnessed and used to heat up a property.

What is a hydrogen fuel cell?

We're used to electricity being generated by the burning of fossil fuels. And while this is an effective process, it is carbon-intensive and the fuels won't last forever.

Solar panels have grown in popularity in recent years as homeowners look to reduce their reliance on their energy supplier by generating their own renewable energy. Solar isn't the only way to generate electricity though.

Hydrogen fuel cells are a lesser known alternative to burning fossil fuels in a cleaner manner.

So not only can a fuel cell produce electricity for a home, they could also provide a certain level of heating and hot water too.

How do hydrogen fuel cells work?

Hydrogen fuel cells are made up of 3 main parts:

The process begins with hydrogen moving through the anode where it is broken into electrons and protons. The electrons move through a circuit, generating electricity and heat as a by-product, while the protons are passed through the electrolyte membrane.

Meanwhile, oxygen is passed through the cathode where it's combined with those protons and electrons to form water.

Unlike batteries, which need to be recharged, fuel cells will continue to work as long as it's being provided with fuel.

Where can fuel cells be used?

The potential for fuel cells is huge as they can be used to power a number of things:

Simply put, the scope for hydrogen fuel cells is huge.

What are the benefits of hydrogen as a fuel?

While hydrogen isn't currently widely used as a source of fuel, it holds plenty of potential.

There are two main benefits to using hydrogen over natural gas:

Burning fossil fuels, such as natural gas and oil, to heat our homes releases carbon into the atmosphere – a major contributor to climate change. Burning hydrogen, on the other hand, only produces heat and water. No carbon whatsoever.

This could help to significantly lower the carbon footprint of homes across the UK.

1kg if hydrogen contains roughly the same amount of energy as 2.8kg of gasoline. That's almost 3 times as much energy.

Due to the benefits hydrogen has over natural gas, there has been much talk about the gas network making the switch to hydrogen.

Should this happen, hydrogen-ready boilers would need to be installed into homes as a replacement for existing gas boilers.

Find out if hydrogen is a viable alternative to gas for home heating: Hydrogen Boilers: An Alternative to Gas Central Heating?

CHP stands for Combined Heat and Power and can use fuel cell technology to produce electricity and heat.

When electricity is produced, a byproduct of that process is heat. In conventional gas or coal power plants this heat would be wasted but with a CHP system, it's captured and can be used to deliver increased efficiency.

When done on a large scale, a CHP is much more efficient than gas and coal. Combined Heat and Power Plants can achieve efficiency levels of around 80%, a number that dwarves the 52% maximum efficiency of gas power stations and 38% for coal. 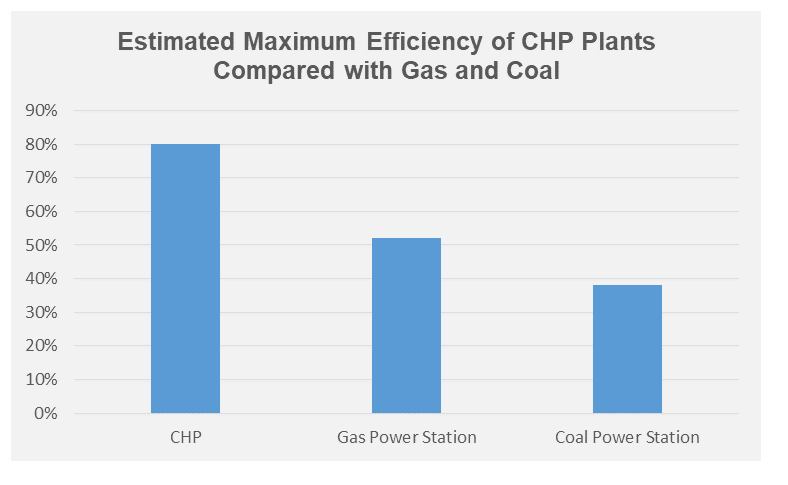 It's possible for most fuels to be used in a CHP process. It will simply increase the efficiency by capturing the heat that would have otherwise been lost during electricity generation.

It's possible for this process to provide cooling too, which is known as trigeneration.

What is Micro CHP?

CHP can also be performed domestically too, generating electricity and heat for your home in an efficient manner.

They are powered by gas (either from the mains supply or LPG), which might be fossil fuels but as the process is more efficient than getting heat and electricity supplied from different sources, it's still considered 'low carbon'.

One example of a micro-CHP system is the Viessmann Vitovalor CHP.

The Viessmann Vitovalor is a micro CHP system that can be installed into a domestic property. There are currently only a limited number of CHPs on the market and even fewer installed in properties across the UK.

This is despite the Vitovalor being capable of generating up to 18 kWh of electricity per day as well as heating and hot water in a highly efficient way.

Fuel cell technology extracts hydrogen from natural gas (supplied by the grid just like a conventional gas boiler) which is then converted into energy. Some benefits of installing a Viessmann Vitovalor CHP include:

While there are a number of benefits to having your heating and electricity supplied by a micro-CHP system, one sticking point is the cost. The Viessmann Vitovalor can cost between £10,000 and £15,000.

The future of fuel cell technology?

Much of the conversation around fuel cells revolves around them fuelling cars. While petrol releases various toxic gases into the atmosphere, hydrogen fuel cells only produce heat and water. Research and development of fuel cell cars has already begun.

Elsewhere, hydrogen fuel cells could be used to power anything with a battery – supplying energy to anything from portable devices right up to large scale buildings.