Boiler Guide helps thousands of people each year to save money by providing a quick and easy way to find and compare quotes from local and trustworthy Gas Safe engineers.

We've helped so many people since we launched in 2003 that we decided to learn a little more about them. Specifically, where they are in the UK.

To do this, we analysed ten years of boiler repair enquiries from UK households, received between 2009 and 2019, to find out where and when boilers are most and least likely to be 'on the blink'.

A note about the data: Certain regions are more densely populated than others so to simply compare the number of enquiries from each wouldn't be a fair representation. So, to make sure our findings were as proportionally representative and accurate as possible, we found out the total number of households in each region (according to the Office for National Statistics), how many boiler enquiries came from each of them and then calculated the figures as percentages. This gave us accurate but very small numbers, so we finished off by multiplying all of them by 10,000 to get our final results for comparison.

Once the dreaded maths was out of the way, here's what we found out about 'Boilers on the Blink' in the UK.

Where in the UK Are Boilers Most Likely to Breakdown? 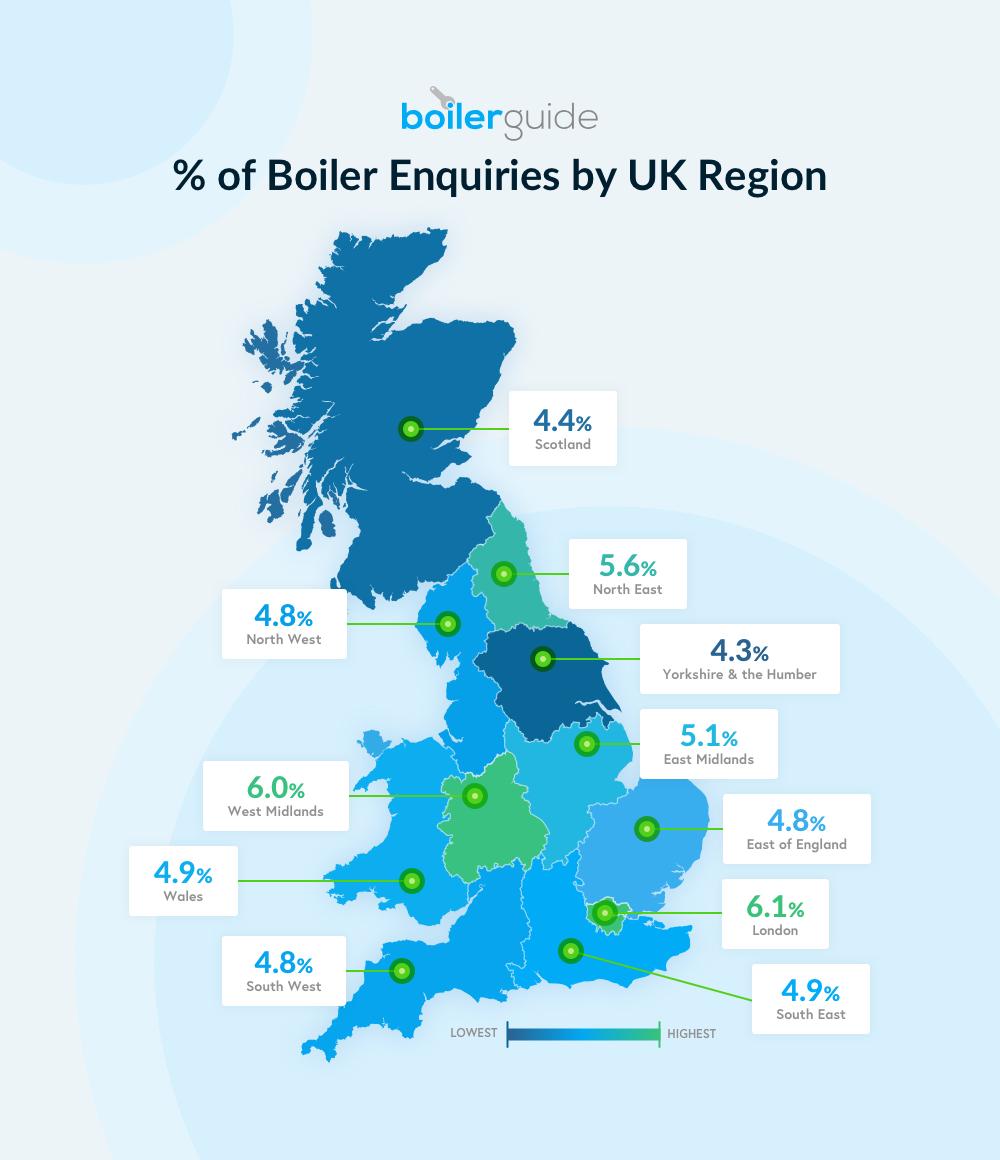 The next logical question is why are more boilers breaking down in London than elsewhere? It's not that there are simply more homes and more boilers in London as we took this into account when standardising the data, so what else could it be?

Perhaps it's because there are older properties (and therefore older heating systems) in the capital which are more likely to develop faults. There are also plenty of listed buildings which aren't allowed to update their heating systems as easily. Of course, it's a very densely populated area with a large number of homes of multiple occupancy, which could be placing boilers under more strain.

Being in the south of the UK, London also enjoys a higher average annual temperature than the north. Although you may presume that this would mean they use their boilers less, in reality households which leave their boilers inactive for a longer period of time can find that the system stagnates and blockages develop, causing more repair issues.

The number of rental properties is also a possible factor. According to a report by UK parliament on 'Home ownership and renting: demographics', private renting is more common (and owner-occupation is less common) in London than the rest of the UK. In fact, according to a survey carried out by the Resolution Foundation in January 2019, London has the lowest percentage of homeowners at just 37.2%.

Interestingly, the North East and the West Midlands – which were the regions which submitted the 2nd and 3rd highest numbers of enquiries to Boiler Guide – have the next lowest levels of home ownership.

Why does renting or owning a property make a difference? Well, in a rental property, the responsibility for servicing, repairing or replacing the boiler falls to the landlord rather than the tenant. If the boiler breaks, the tenant won't be the one paying for a repair or replacement, so this may mean that boilers don't receive the ongoing maintenance they need to stay in good condition. The landlord isn't in the property to notice small issues worsening over time and, as long as the boiler is functioning, tenants may be less inclined to raise it with their landlord until a complete breakdown occurs.

However, Yorkshire's home ownership levels (although significantly higher than London) are by no means top of the table, yet we received the fewest boiler repair enquiries from this region. So is there something else going on which makes a boiler less likely to break down up north? We're not sure, but perhaps the colder temperatures mean that people are using their boilers for more of the year and so they have less chance to stagnate and develop faults.

It's also possible that there is a correlation between household income and what impact that has on a household being able to pay for a boiler repair. In 2018, the BBC reported that the towns and cities in the UK with the lowest average wages were mostly in Yorkshire and the North West of England which (excluding Scotland) have also submitted the lowest number of repair enquiries to Boiler Guide. Does this suggest that although a boiler may be struggling, a household without much disposable income may choose to hold out as long as possible until paying for a repair is the only option. It's no surprise that the highest wages are earned in London, which could also be a factor in London homes being more likely to have the money needed to get a boiler repaired sooner.

When Are Boilers Most Likely to Break Down? 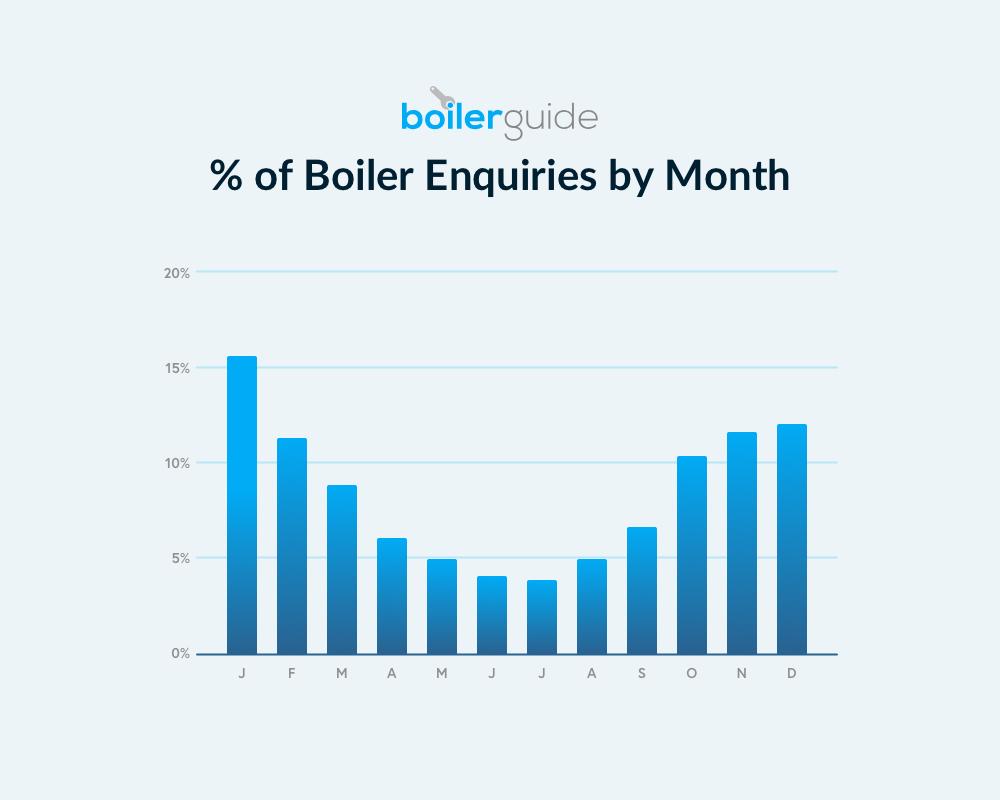 To some, it may not be earth-shattering news that boilers are more likely to break down in the cold of winter and less people are fixing their boilers in the summer, but there are lessons we can learn from seeing it confirmed in cold hard data.

Why is a Boiler More Likely to Break Down in January?

There are two common reasons for a boiler on the blink during the winter months of December and January.

The first is that you are using your boiler on a daily basis and the harder a boiler has to work, the more strain you're placing on its components. If the boiler is suffering from wear and tear or small issues, this is the time you're most likely to push it over the edge into a breakdown.

The second potential reason for a boiler breakdown in winter is the freezing outside temperatures. Frozen water in pipes, the boiler itself and the condensate pipe can create a blockage which will cause the boiler to stop working.

How to Prevent a Boiler Breakdown

Get your boiler serviced every year by a Gas Safe engineer. A boiler is much like a car in that it needs to be maintained to keep it in good working condition. The annual boiler service is an engineer's opportunity to check the boiler is working efficiently, effectively and safely. They will also be able to catch small issues before they cause a major problem and will clean and replace parts which are showing signs of wear and tear.

You should get to know how your boiler works and to recognise when there might be a problem. Listen for odd noises and if the boiler seems to be struggling to reach a high enough temperature, don't ignore it as it's unlikely things will get better without some maintenance or a repair.

Signs That Your Boiler Needs Replacing

If you think that your boiler may need replacing in the near future, don't wait for it to completely give up before you get a new one. Aside from the inconvenience of living without heating and hot water until a replacement is fitted, there are several other reasons why you shouldn't delay a boiler replacement.

An inefficient or malfunctioning boiler won't be heating your home effectively so you'll probably be feeling cold in your home and turning the thermostat up to compensate making your heating bills more expensive. It could also be costing you significant money in repairs, and most importantly, it could become a serious safety risk if it starts to leak carbon monoxide in your home.

Here are some common signs that you're boiler should be replaced sooner rather than later.

The pilot light (flame) is no longer burning blue. If you notice that the pilot light is orange or yellow, the boiler may be producing carbon monoxide, an odourless and colourless gas which is potentially lethal. Similarly, if you can smell the eggy odour of gas in your home when the boiler is working there may be a gas leak. If you suspect a gas or carbon monoxide leak you should turn the boiler off and contact the Gas Emergency Line on 0800 111 999.

Why is Summer the Best Time to Get Your Boiler Repaired or Replaced?

Although demand for boiler services, repairs and replacement is lower between March to October, this is actually the best time to get these jobs carried out. Here are a few reasons to go against the trend and get your boiler repaired in the summer.