Why Is My Central Heating So Noisy? 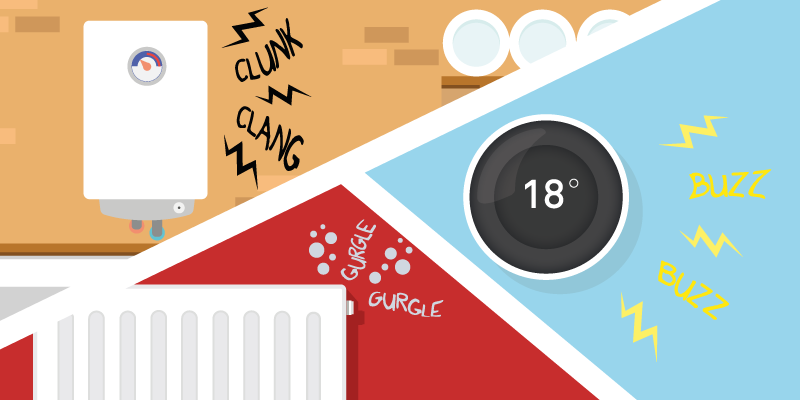 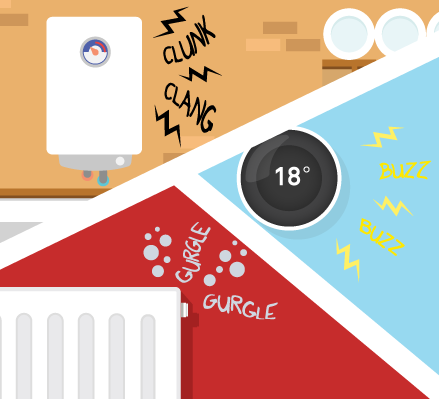 A noisy central heating system or boiler can be caused by a number of issues and the type of noise (clanking, banging, buzzing, dripping, humming or gurgling), as well as the location, will help you to find the fault, which could include:

We've put together a short overview of the different kinds of noises you might be hearing and what they usually mean, however we always recommend getting a diagnosis by a professional engineer before taking any action.

The type of noise you’re hearing is a key factor in finding the fault that’s causing all of the noise.

Is there a leak?

Should you hear a dripping, or another noise that sounds like water coming from your central heating system, then there might be a leak and you should turn your heating and mains water supply off immediately. Even the smallest of drips could eventually lead to something larger and lead to damage.

Once the water supply is off, don’t attempt to fix the fault yourself. Instead, contact a fully-qualified heating engineer.

If you’re hearing noises from your boiler that resemble a kettle boiling, this is something known as 'kettling'.

Central heating boilers heat water using a heat exchanger which, much like a kitchen kettle, builds up a coat of limescale over time. The limescale flakes away and floats to the bottom which over time causes a blocage and restricts the flow of water. This means that the heat exchanger is heating hot water, but can't send it off round the house as usual. The trapped water then boils, steams and expands in the system which creates pressure and 'kettling' noises.

It may sound as if the boiler is about to explode but don't panic; modern boilers are equipped with safety devices that will turn the system off if they detect too much pressure. It is not, however, advisable to ignore the noises as this problem will reduce your system's efficiency and cause long term damage. It's also possible for other substances like rust, dirt or even air, to build-up in the system and cause blockages.

Whistling sound from the boiler

Whistling is a noise associated with limescale build up and kettling, but could also indicate trapped air in pipes or a loss of pressure. While it should be relatively simple for an engineer to release the air, the problem is probably being caused by a fault elsewhere so may need some investigation.

To clear the debris, you will need a heating engineer to perform a powerflush which involves various chemicals being flushed through the system to clear the limescale.

If a powerflush is needed, your heating engineer might recommend having a magnetic filter installed. Magnetic filters attract any debris that’s circulating around the heating system before it has chance to form a blockage.

Gurgling noise from radiators or pipes

Excess air in the pipes or radiators is likely to be the reason for gurgling noises. If there’s too much air in the system it can act as a blockage, preventing the hot water from circulating properly which then leads to the trapped water overheating and making a gurgling noise.

To clear the excess air from the radiators, they need to be bled. Our guide to bleeding your radiators can take you through the process step-by-step.

Another cause of gurgling noises from the central heating system can be a frozen condensate pipe. The condensate pipe sends waste water away from the boiler and outside down a drain. During the winter months the condensate can be prone to freezing which causes a blockage and prevents the water getting out. At this point your boiler should lock out until the pipe has been thawed.

You might also want to take a look at the flow rate. To operate effectively, modern boilers need a certain flow rate and if it’s too low, you might hear a gurgling sound. The flow rate for your boiler can be found in the manual but you could also ask the manufacturer or installer.

When you turn the central heating on, hot water passes through pipes and the heat causes them to expand and contract. As this happens, it’s totally normal for your system to make some knocking, clanking or tapping sounds.

However, in some cases it may be that the pipes aren’t fitted in the correct position e.g. too close to floorboards. If you notice that pipes around your home are knocking against the floor or wall, you should contact a heating engineer to take a look as this could eventually lead to damage.

These types of knocking sounds can also be a sign of air in the system. As we mentioned earlier, air can be cleared by bleeding the radiators.

Any form of humming, buzzing or vibrating could mean that a part of your central heating system isn’t working at their best e.g. the thermostat, central heating pump, pressure gauge or filling loop.

It could be the case that the settings simply need to be adjusted. For example, many modern central heating pumps have 3 speed settings and if it’s set too high the pump can begin to vibrate. Before reducing the setting, it might be worth consulting with your heating engineer as the pump might be at a high setting for a reason.

Do you live in a hard water area?

If you live in an area with hard water – water with a high mineral count – then it’s worth installing a water softener which will replace the particles found in hard water with sodium. This will greatly reduce the chances of limescale building up within the central heating system in the future.

It's important that you don't ignore unusual sounds coming from your central heating. Even if things seem to be working fine at the moment, the system is giving you a not so subtle warning of a fault somewhere in the system.

At the very least this could be making your system less efficient and costing you more in energy bills, or it could be something that worsens over time causing damage that could be both costly and dangerous.

In some cases, such as bleeding a radiator, it’s possible to tackle the cause of your noisy central heating system yourself but for the majority of causes, you will need to hire a fully-qualified heating engineer.

As heating engineers all offer their own rates, we highly recommend comparing multiple quotes to give you the greatest chance of finding the most competitive price. Using Boiler Guide you can get free quotes from Gas Safe registered engineers in your area who will diagnose your noisy boiler and give you some professional advice.