In August 2010 we reported that the oldest boiler in Britain had been found, but it seems that the title of oldest heating appliance belongs to another.

However, Boiler Guide has recently been contacted by Geoff and Janine Kirby of West Mersea to challenge the Crane Cavalier in Essex; the hot water cylinder in their bungalow is at least 64 years old and still going strong! 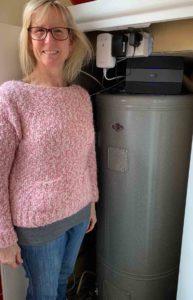 At the time of our last article on the subject the national energy supplier Npower was searching for the UK's oldest boiler. After 100 entries and a false alarm for a 32-year old system in Northumberland, the title of oldest boiler went to a 42-year old Crane Cavalier in Billericay, Essex. The boiler was installed in 1968 and was still heating Colin Sadler's home.
Colin's prize was a £3,000 contribution from Npower towards a new boiler with an A rating for efficiency to "make a big difference to his energy bills and carbon footprint". 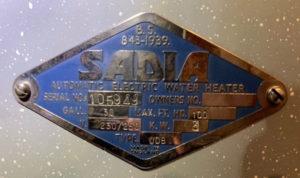 Geoff and Janine move into their 3-bedroom, 2-bathroom bungalow in West Mersea, Mersea Island, in 1993 and it has been their family home ever since. Mersea Island is just 5 miles long and 1 mile across; it's located near Colchester but is cut off by the tide. At the time of moving in they were told by the previous owner that the Sadia water heater had been there for as long as he could remember. The cylinder is powered by electric and is cork-lined with no modern lagging but according to Janine is still only "very slightly warm to the touch".

Although Geoff and Janine's 2 sons moved out around 6 years ago, for 20 years the Sadia provided hot water for the whole family. While heating is provided by electric storage heaters and they have an electric shower, the cylinder provides hot water for all the sinks in the kitchen, utility room and downstairs bathroom.

Janine said: "We've never had any problems with it and it's never needed a repair. It doesn't need any maintenance; the most we do is run a duster over the outside. No repairs needed since we've moved in. Apart from running a duster over the outside no maintenance needed. It runs on an electric timer so we heat it up overnight and it also has a switch which can heat a half or full tank."

Obviously, at Boiler Guide we're in the business of helping people to make their heating and hot water systems as efficient and effective as possible, so we had to ask the question: do you think you'll be replacing it soon? Although Geoff and Janine have recently modernised their home, they have chosen to keep their trusty Sadia in place and have no plans to replace it.

Geoff responded: "We actually find that our energy bills are comparable to those of homes with gas or oil boilers. If / when it eventually breaks, we might change a system that provided both hot water and heating, but we're of the opinion that if it isn't broken, why change it?"

While Geoff and Janine's trusty Sadia continues to work for them, generally speaking the older a heating system is, the less efficiently it will work. This means that over time it will use more fuel to produce heat and hot water and your energy bills will start to rise.

If your heating system is 8 years old or more then you could save both money and lower your carbon emissions by replacing it with an A rated energy efficient system. Depending on the system you're replacing and the size of your home, a boiler replacement could save you up to £305 in annual energy costs.


If it's time to replace your current boiler, use our free service to get quotes now