The UK’s largest home heating survey, taken in November 2021, has revealed that the majority of UK homeowners will not be applying for the government's £5000 heat pump grant and 43% do not support a ban on gas boilers.

The Great British Home Heating Survey of 18,000 customers conducted by us here at Boiler Guide saw 51% of respondents state that they will not be applying for the £450 million Boiler Upgrade Scheme, set out in the government’s flagship Heat and Buildings Strategy.

Hands off our boilers

As part of its Heat and Buildings Strategy, published in October 2021, the government has announced a phasing out of new fossil fuel heating in the UK.

This will start by shifting the 1.1 million off-grid-homes in England relying on high-carbon heating sources such as oil and coal to electric heat pumps.

By 2025, the government will publish its plans to end all new connections to the gas grid for new-build homes as part of the long-term ambition of phasing out gas boiler installations by 2035.

We asked if customers supported an outright ban on gas boilers. 43.4% do not back a ban, while 24.54% of those surveyed were in favour. 31.97% were unsure or had not thought about it.

Buildings in the UK make up 23% of total carbon emissions, and heat generation accounts for half of this. To ensure 95% of UK homes generate clean energy in line with the legally binding net-zero by 2050 target, the government is trying to incentivise the switch to low-carbon heating technologies, especially heat pumps.

However, combining upfront and running costs of heat pumps can cost up to £1,190 per year more than gas boilers.

Within this phasing out of gas boilers, the installation and running costs of heat pumps will need to be significantly reduced to ensure a fair cost that's at least similar to the cost of gas boilers.

When asked, “What’s putting you off renewable heating systems”? 54.37% of people pointed to the “Cost to install” followed by 17.83% judging a heat pump and other renewable systems as “Unsuitable for my property”. A lack of available space is also a concern for homeowners, garnering 14.97% of responses.

It's clear that the costs of low-carbon heating represent the most significant barrier for people looking to switch from fossil-fuelled systems. The costs of an air-source heat pump, the most common in the UK, might fall between £9,000 and £13,000. This large variance depends on the property size, the system output and the necessary insulation required.

This creates uncertainty in the market from the consumer and supplier side which slows the development of heat pumps and discourages investments.

To meet the government’s aim of deploying 600,000 heat pumps per year until 2028, the heat pump market will have to scale considerably while keeping costs down.

By setting production obligations for heat pump and boiler manufacturers, and establishing an effective policy framework the government plans to enable industry innovation and improve efficiency across the supply chain so that more heat pumps can be produced for more homes.

These efficiency measures also aim to include decreasing the time for installation, improving design and spatial efficiency and improving trade standards such as through training practices.

However, the running costs of heat pumps account for 55-65% of their lifetime costs largely due to the electricity that they demand. Electricity currently costs up to five times as much as gas. Therefore, bringing down running costs in particular requires a rebalancing of monthly energy prices.

This partly comes through expanding domestic renewables which provide the cheapest supply of electricity out there, with the cost of solar falling nearly 85% in the last decade. Solar power especially has the potential to five-fold its supply of electricity by 2030 with no extra cost to consumers, provided that the government sees through its promises to increase support.

The government could also significantly reduce the cost of electricity by rebalancing the environmental and social levy contributions to monthly energy costs. These are in place to fund energy saving schemes and renewable developments.

These energy efficiency measures, including heating upgrades and insulation, continue to decrease overall energy consumption in the UK by 16% since the year 2000.

However, shifting social levies, such as those that fund the ECO4 scheme, from electricity to natural gas and the remaining levies to general taxation would significantly reduce electricity costs. This could decrease the annual costs of a heat pump by up to £450, according to research by Nesta.

The government will release its decision and evidence for this in 2022, with plans to fully establish a switch by the end of the decade.

The government estimates that heat pump costs will plummet in the coming years through the industry-led innovations outlined in the Heat and Buildings Strategy.

In the meantime, the government has announced public investment funds, such as the £450 million Boiler Upgrade Scheme (BUS) in England and Wales, to incentivise early adopters into making the switch sooner.

BUS offers £5,000 or £6,000 towards the cost of replacing boilers with heat pumps, depending on the type of installation. However, this will run for 3 years and is capped at 90,000 properties.

77% of those surveyed said that the government should provide more financial help to decarbonise heating.

“The data we have gathered points to general public support for decarbonising heating, but it is clear that the vast majority of homeowners think the government should be offering more financial incentives and support.”

“Most people are aware that the £5000 grant will not come close to the true cost of the installation of a heat pump, this, alongside the fact that heat pumps may not be suitable for millions of homes, is clearly not lost on the public.”

While a majority of those surveyed believe heat pumps are a good alternative to gas boilers (33% compared to 26.28% who don’t), 51% have not yet considered replacing their existing system with a renewable alternative. 35.63% have, while 12.66% haven’t thought about it at all.

Heat pumps do come out on top when it comes to the most considered renewable heating systems with 46.2% stating that a heat pump would be the first choice. Solar panels (31.34%) and electric boilers (17.6%) also feature in the poll of 18,000 homeowners. 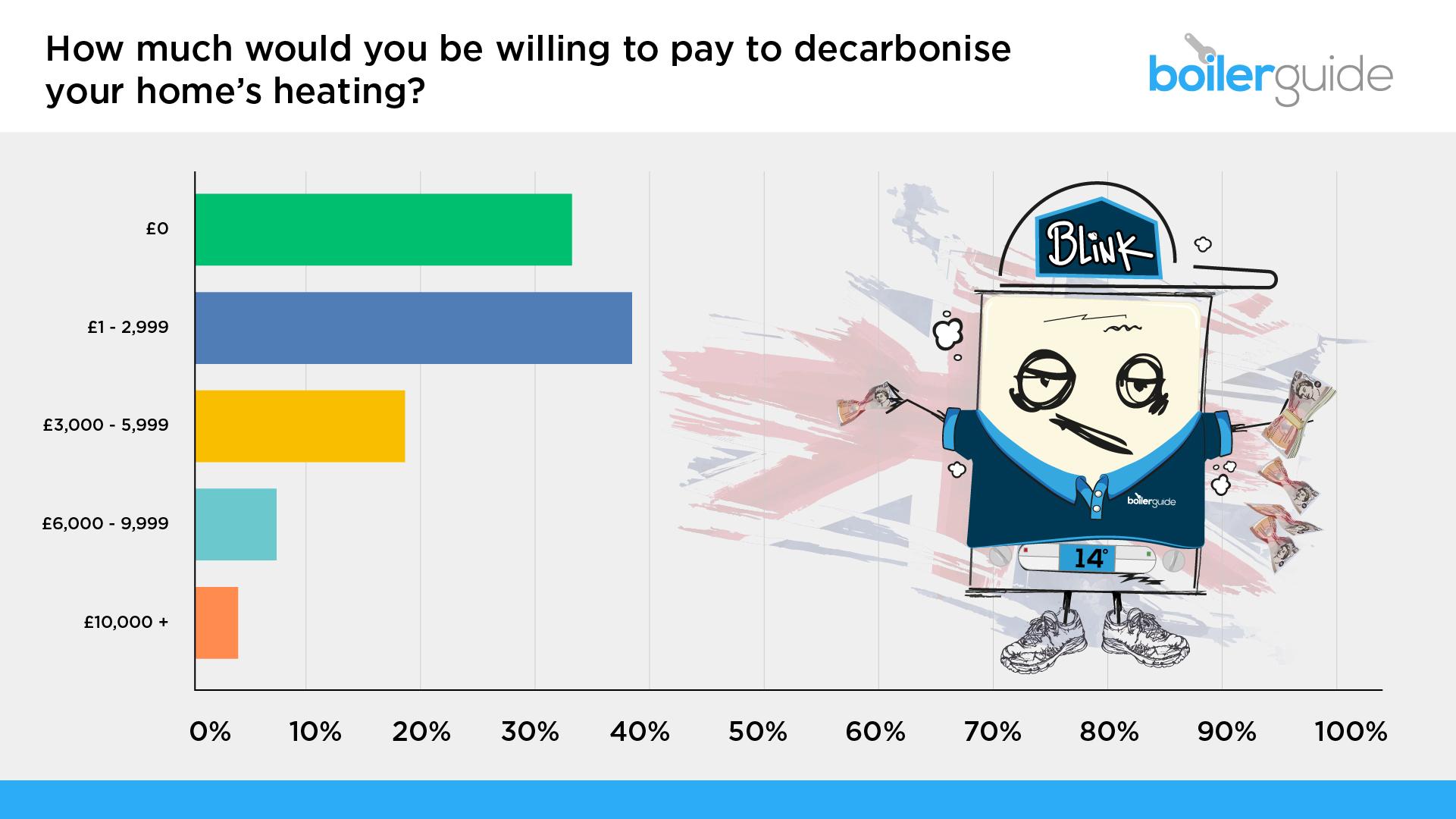 “It is unsurprising to see that the majority of customers are happy to pay for a renewable system if the price is comparable with a new gas boiler. The reality, however, is that the costs of heat pumps and solar installations will usually exceed £10,000 and it seems there is little public appetite or ability to invest such large sums of money to replace a system they are happy with.”

We also asked customers if they believe the UK can achieve net-zero targets. Just 31.55% of those surveyed think that the “UK can reach carbon net-zero by 2050” compared to 68.45% who think this won’t happen.

One of those surveyed said:

“When people see other countries refusing to make sacrifices and making no effort to bring down their use of coal etc - they will refuse to comply”. 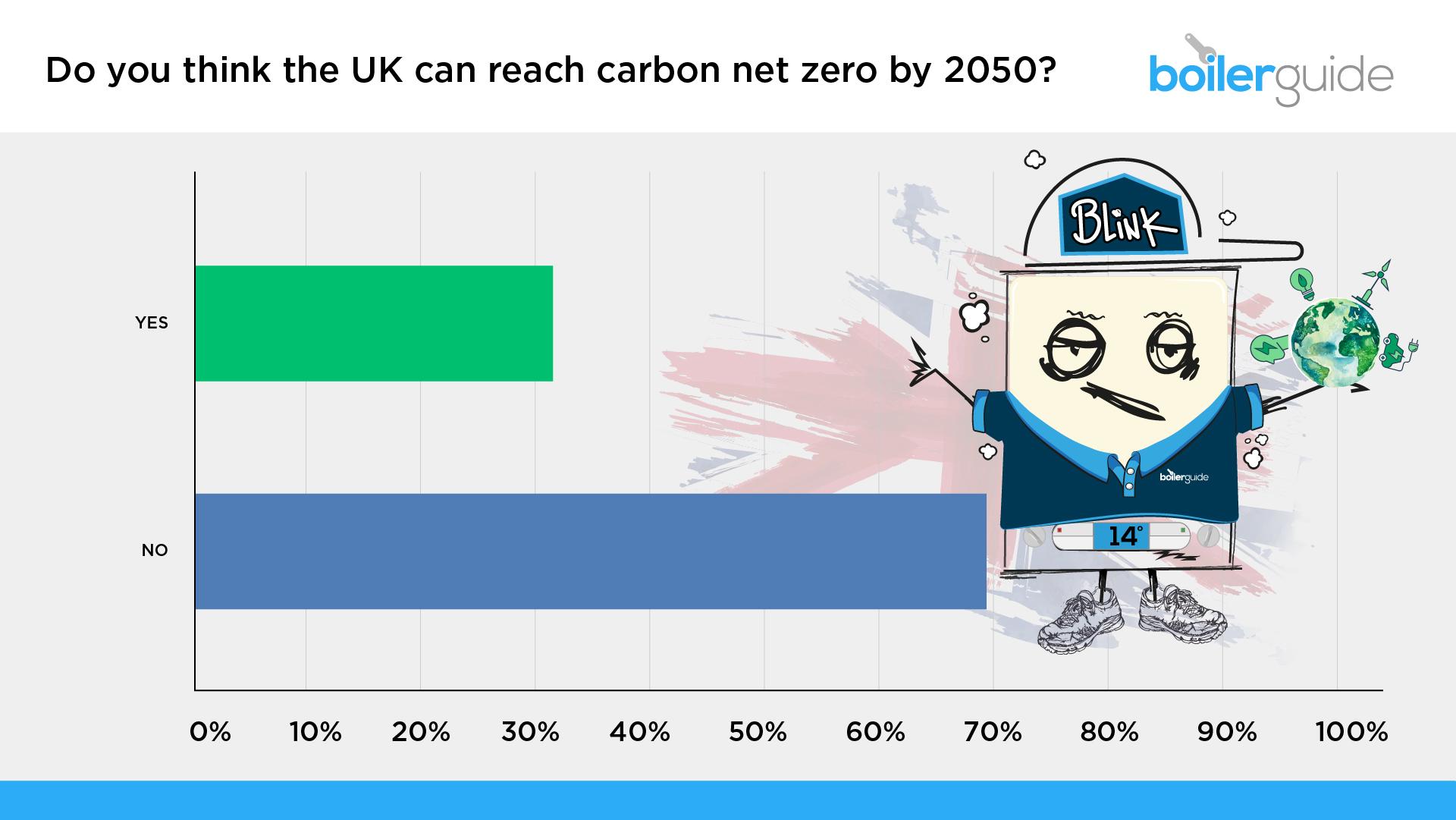 Ciaran has previous experience writing about emerging sustainable technology in the aviation sector, as well as writing for social justice issues on charitable platforms. He now focuses on the world of domestic heating, energy saving and the green transition.