Advantages and Disadvantages of Hydrogen Energy

Our gas boilers are a leading cause of climate change.

Burning natural gas to heat our homes and hot water releases carbon into the atmosphere. And this is a leading cause of climate change. So to tackle this, the government is planning to turn to hydrogen. It can be added to the current gas network and sent to our homes in the same way as natural gas but burning it doesn’t produce carbon. This makes it a possible alternative to natural gas.

Let’s take a look at whether hydrogen is a good choice for home heating.

Hydrogen, nitrogen and oxygen make up 75% of the universe and form the foundation of much of our planet's life.

Hydrogen is found in almost all plant matter and water. The sun is also made up of a lot of hydrogen, but it is so light that it evaporates from the surface of the earth through the heat of the sun's rays.

Hydrogen is the most simple of all our elements being made up of just one proton and one electron. This means that in most scenarios it doesn't exist by itself but is combined with other elements (e.g. water or H2O is 2 parts hydrogen to one part oxygen). However, hydrogen is a clean source of energy which, if we can extract it from water, natural gas or biomass, can be used to power and heat our homes.

How hydrogen is made

Electrolysis involves passing a high current of electricity through water to separate the oxygen and hydrogen atoms.

Steam-methane reforming is the process of separating carbon and hydrogen in methane. It is the method used most commonly at the moment because hydrogen can be extracted in large quantities, but it results in the emission of carbon dioxide and carbon monoxide. Both of these gases are harmful to our atmosphere and will contribute to global warming.

However, it is possible to capture the carbon emitted during the process of producing hydrogen with Carbon Capture Utilisation Storage (CCUS) systems which would prevent the carbon from being released into the atmosphere.

Hydrogen is a renewable energy source which means we cannot run out of it, at least not on a human timescale. It's a rich source of energy which is all around us.

Hydrogen is a clean energy source

When we burn hydrogen no harmful byproducts are released into the atmosphere. In fact, once hydrogen has been used as an energy source, it can be converted to drinking water for astronauts.

Hydrogen doesn’t cause damage to human health unlike nuclear energy or natural gas.

Hydrogen is incredibly dense in energy and is able to provide a lot of power. It is 3 times more powerful than most fossil based fuel sources so less hydrogen is required to perform the same tasks. This is why hydrogen is used in space exploration to fuel spaceships, aeroplanes, boats, cars and fuel cells.

It would speed up the use of renewables

For hydrogen to be truly carbon neutral any electricity used to make it must come from renewable energy sources.

In the government’s Hydrogen Strategy, it’s stated that off-shore wind generation will be making 4x more energy by 2030 to support demand for hydrogen.

Will cost the same as gas boilers

A concern with moving to low-carbon heating is that homeowners will have to foot the bill. But the biggest boiler manufacturers: Baxi, Ideal Vaillant and Worcester Bosch have all promised to keep hydrogen-ready boilers at the same price as gas boilers.

Because of its high energy content, hydrogen gas is a highly flammable and volatile substance which makes it a risky fuel to work with.

Hydrogen energy is expensive to produce

Both steam-methane reforming and electrolysis are expensive processes which prevents a lot of countries from committing to mass production. Research and trials are in process to try and discover a cheap and sustainable way to produce enough hydrogen without contributing more carbon into the atmosphere.

Hydrogen energy is difficult to store

Hydrogen is a much lighter gas than gasoline which makes it difficult to store and transport. To be able to store it we need to compress it into a liquid and store it at a low temperature. The high amounts of pressure needed to store hydrogen makes it a difficult fuel to transport in large quantities.

Hydrogen can be dangerous

Hydrogen is incredibly flammable which makes it a dangerous fuel if not handled correctly. There is also no smell to hydrogen so sensors are required to detect leaks.

There are many ways of making hydrogen. And some of the produce carbon.

In the UK, we’re likely to use Steam Methan Reforming (SMR) where steam reacts with metane to make hydrogen. But also carbon.

Fortunately, it is possible to capture this cabron through Carbon Capture Utilisation and Storage (CCUS). Then once captured it can be used by other industries – like adding fizz to drinks.

This method is known as blue hydrogen – find out about all the colours of the hydrogen rainbow.

Hydrogen holds a lot of the right answers when it comes to cleaning up home heating. However, we can’t switch to putting hydrogen in the gas network overnight.

Before we can start using hydrogen, the technology needs to be tested. So hydrogen trials are being set up in areas across the country.

The government has said there will be a neighbourhood trial by 2023, large hydrogen village by 2025 and possibly a town pilot by 2030.

Can emit nitrous oxide when burned

When hydrogen is burned in a particular way (based on temperature, size of the flame and airflow) nitrogen oxide (NOx) can be emitted. This is gas causes air pollution.

However, the same can be said of our current gas boilers which have been designed to produce low NOx emissions. So the same would need to be the case for hydrogen boilers.

Could hydrogen be used in home heating?

At the moment the vast majority of UK homes rely on fossil-fuels for heating. Mainly natural gas and oil boilers.

To reduce carbon emissions in line with government targets and fight climate change, we need to change the way we heat our homes. And hydrogen is a strong contender.

Moving from natural gas to hydrogen would allow us to keep heating our homes with boilers. Saving us from the mammoth task of replacing them all with renewable heating systems like air source heat pumps.

Gradually we could increase the levels of hydrogen supplied to homes. So we’d begin with a hydrogen blend of 20% hydrogen with natural gas. This would then be increased to 100% hydrogen over time.

The main benefits being:

So when could it happen?

The earliest we could see hydrogen added to the gas network is 2026. But no decisions have been made yet.

If we are to move to a hydrogen future then we’ll all need hydrogen-ready boilers. Most condensing gas boilers can run on a hydrogen blend of 20% hydrogen but not 100% hydrogen.

Worcester Bosch and Baxi have developed prototypes of hydrogen boilers. These boilers still work with natural gas but after a short visit from a heating engineer they can work on a 100% supply of hydrogen.

Find out which boilers are certified to run on a hydrogen blend in our guide to Hydrogen Boiler Manufacturers. 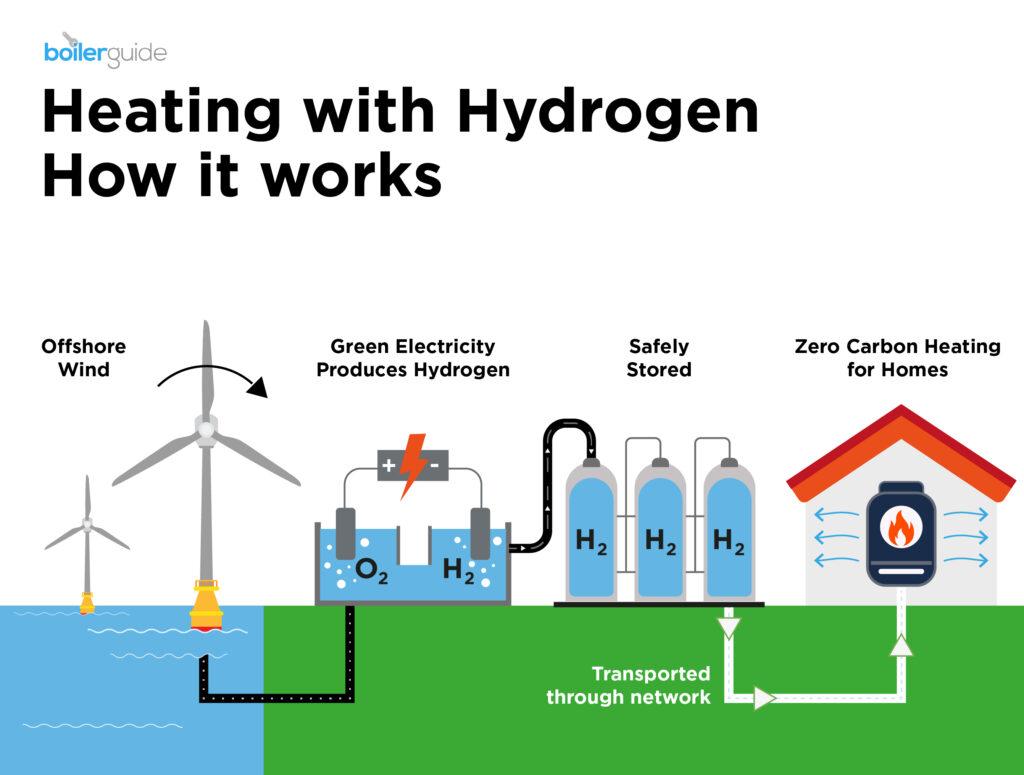 So, is hydrogen heating a viable option?

There is a strong case for hydrogen playing a big part in the future of home heating.

However, which switching from natural gas to hydrogen may sound simple enough it’s far from it. Producing hydrogen is currently expensive and the process can emit carbon. Which defeats the object of swapping to a hydrogen network somewhat.

According to industry experts, hydrogen has a major role to play in the future of home heating. Hydrogen heating trials are already taking place in the UK where a combination of hydrogen gas and natural gas is already in use in some areas. The government is planning more trials over the next decade: neighbourhood trial by 2023; large hydrogen village by 2025 and possibly a hydrogen town by 2030.

Get quotes for a gas boiler

Whatever the outcome of these trials, hydrogen boilers are unlikely to be an option for UK homeowners for the foreseeable future. If you are looking to replace your heating system with a more environmentally friendly solution now, a modern and more energy-efficient gas boiler might be your best option. Some homeowners might want to consider installing a heat pump, solar thermal panels or a biomass boiler, but there are several factors to consider.

To get professional advice and free installation quotes for a new boiler, send us an enquiry today. We'll provide you with up to 3 free no-obligation quotes so you can compare and choose the best option for your home.