What is Hard Water?

This can cause limescale, which is good news for your boiler. And while you can drink it, if you live in a hard water area you might want to look out for problems with your boiler.

Our research even revealed that boilers in hard water areas breakdown more often than those in soft water areas.

What is hard water?

Rainwater is naturally soft but becomes hard water as it moves through spongier rocks like limestone – dissolving and collecting mineral deposits as it flows.

What is soft water

Rainwater is soft water. It has very low mineral content and stays soft as it flows over hard rocks.

There’s also moderate water which is close to being hard water.

Does my home have hard water? 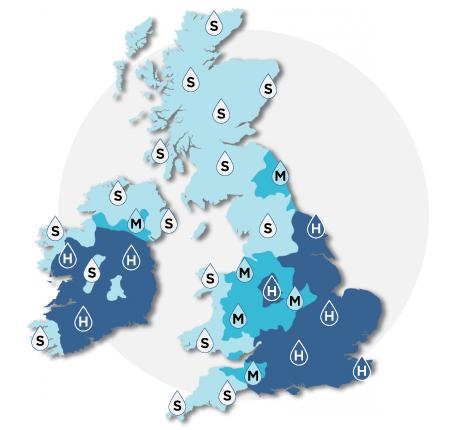 Whether your home gets hard or soft water depends on where you live.

60% of homes in England and Wales receive hard water, with the east coast and areas around London very likely to have it.

What are the effects of hard water?

Hard water can cause both minor annoyances and larger problems in your home:

Hard water can also be more difficult to wash with (or wash clothes in) as it makes it harder to lather soap or laundry detergent. There are no major health risks associated with hard water and its consumption, although it can irritate sensitive skin.

As hard water evaporates, the calcium and magnesium are left behind. When this happens in the home, you’ll notice a white chalk-like substance around taps, shower heads and in the kettle.

While you’ll be able to notice limescale in all of these areas, it also builds-up in pipes, radiators and the boiler heat exchanger.

How can hard water affect my boiler?

The limescale formed by hard water can cause problems in your home heating system.

The deposits can cling to parts of your boiler and clog up central heating pipes. This means they may have a shorter life span and lose their efficiency.

Water could take longer to heat in this situation, meaning you end up using more energy and paying more to heat your home.

Limescale build up on a boiler's heat exchanger can also cause kettling. This is where the flow of water is restricted and water trapped in the heat exchanger gets too hot. It then turns to steam and makes a noise similar to a boiling kettle.

What to do about hard water

If your appliances have limescale you can remove this with specialised products (and even some more natural cleaning recipes). While this is great for smaller items like kettles and shower heads, your heating system will need larger scale approach.

There are different ways to go about altering hard water but the most popular approach is adding a water softener.

Can hard water be softened?

Hard water can be softened by removing the calcium and magnesium.

This can be done through ion-exchange which replaces those minerals with sodium.

If you live in a hard water area then a water softener will give you softened water.

What is a water softener?

An appliance fitted to the mains removes the calcium and magnesium in hard water and replaces it with sodium (known as ion exchange). However, this can leave large amounts of sodium in your water, so a separate tap for drinking might be advisable if this could be a concern to you.

A water softener can cost between £400 and £600. Although some models go into the £1,000s. Rather than paying for one outright, you may want to consider renting one for around £20 a month.

Whilst there is an initial cost to having a water softener installed (plus the cost of salt needed to run it over time) it can make a lot of difference to the feel of your water and lifetime of your boiler. Installing a water softener can mean cutting and soldering pipes which can be a difficult job. So it's recommended that you have the system installed by a trained professional.

A magnetic filter can help

Whether your home has hard water or soft water, a magnetic filter can extend the life of your boiler.

A magnetic filter connects to the pipework of your heating system and remove any debris (including limescale) from the water before it has chance to build-up.

Get a FREE quote from a trusted engineer in your local area.