Somewhere Over the Hydrogen Rainbow

A lot of hope for the future of home heating is being pinned on hydrogen.

When burned, hydrogen doesn't emit carbon into the atmosphere. This makes it far kinder on the environment than natural gas – the most common fuel used by homes in the UK.

However, hydrogen needs to be made. And some of these methods can add to the levels of carbon in the atmosphere.

This has led to the appearance of the hydrogen rainbow. 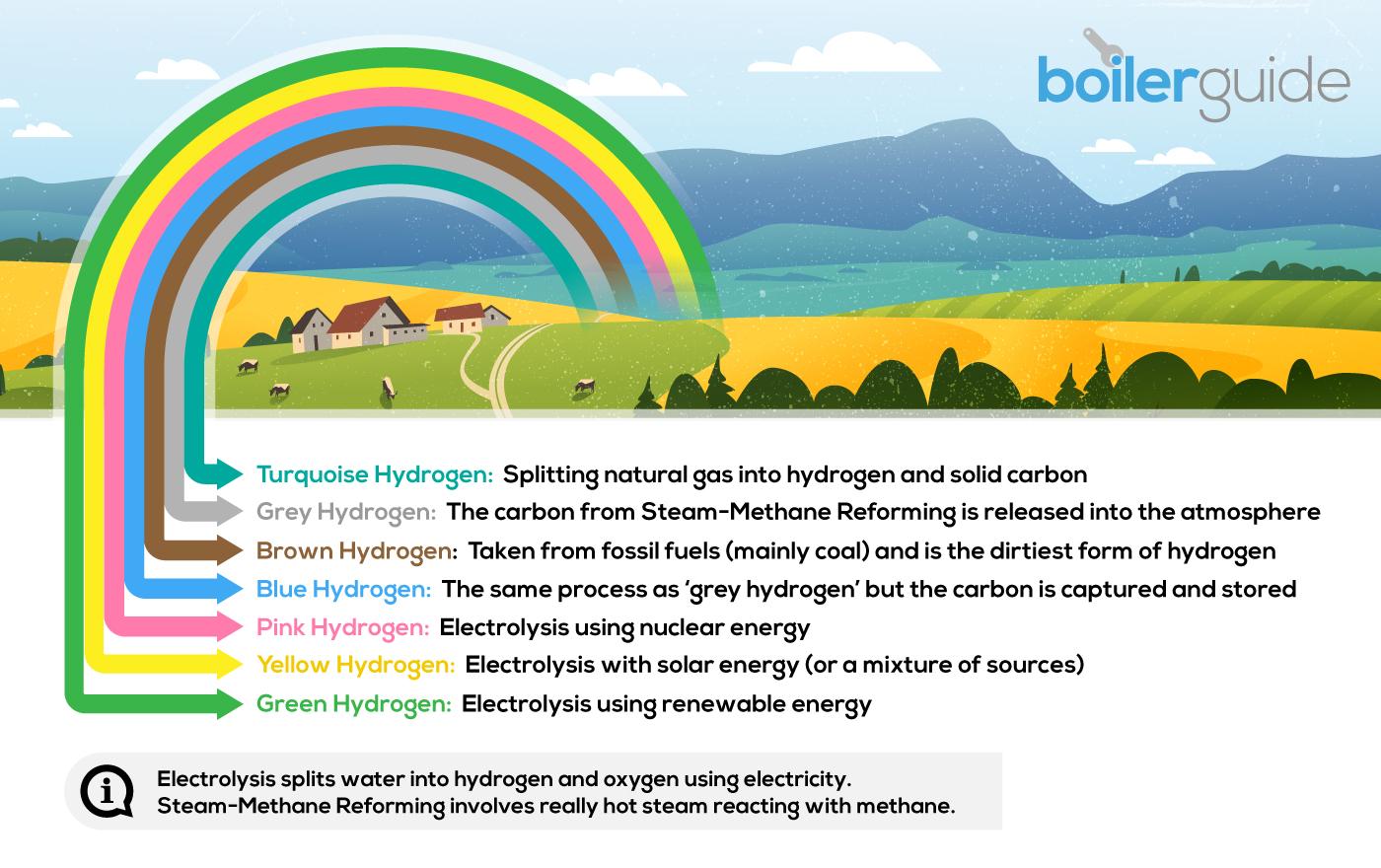 “Pink and yellow and green and brown...”

The hydrogen rainbow gives a colour to each way of making hydrogen.

A common way of making hydrogen is with electrolysis. This is the process of splitting water into oxygen and hydrogen using electricity. How this electricity is generated is the reason for many of the colours in the hydrogen rainbow.

When the electricity for electrolysis is generated by renewables, you have green hydrogen. If hydrogen boilers become part of the future of home heating then we'll need green hydrogen as carbon isn't emitted into the atmosphere.

There are two cases when hydrogen may be called yellow. Most of the time, the electricity comes from solar but it can also be used to describe electricity from multiple energy sources.

In this case, the electricity for electrolysis comes from nuclear power.

Another way of making hydrogen is Steam Methane Reforming (SMR) which involves steam reacting with methane. Heating the steam up normally involves the burning of fossil fuels which releases carbon into the atmosphere and is known as grey hydrogen.

The very same process as 'grey hydrogen' but the carbon is captured and stored so that it doesn't go into the atmosphere.

A process known as 'methane pyrolysis' which involves natural gas being passed through a molten metal. This produces hydrogen and solid carbon.

Extracted from fossil fuels, mainly coal. This process accounts for around 95% of all hydrogen production in the world.

On paper, green hydrogen is the way to go.

Using renewable electricity to make hydrogen wouldn’t add carbon into the atmosphere. And there would be no need to store the carbon – as is the case with blue hydrogen. However, according to the UK Hydrogen Strategy, there’s ‘virtually no’ low-carbon hydrogen being made at the moment. And this is a concern.

Switching from natural gas to hydrogen would go a long way towards lowering carbon emissions from home heating. But if the way we make hydrogen emits carbon then it’s counter-productive. Storing any carbon made by producing hydrogen is one solution. Which is why blue hydrogen is a strong contender to lead UK hydrogen generation.

To do this succesfully, our carbon capture infrastructure needs to grow and the government is pledging £1 billion up to 2025 to support that (source: UK Hydrogen Strategy).

Could we soon be heating our homes with hydrogen?

The gas boiler dates back as far as 1868. Over 150 years later and they're installed in over 80% of all homes in the UK. But steps are now being taken to move away from natural gas as a fuel for home heating.

There's strong talk of renewable heating systems, like heat pumps, taking the place of the gas boiler. And in new builds this is perfectly possible. The government has already announced that new builds won't be fitted with a fossil fuel burning boiler from 2025 onwards.

However, replacing the millions of boilers already installed in homes across the country would be impractical, expensive and even impossible in many cases.

So, rather than replacing the heating systems, it could make more sense to replace the fuel. Enter hydrogen.

Burning hydrogen can heat your home and hot water in the same way as natural gas. The big difference being that it doesn't emit carbon into the atmosphere.

Replacing the natural gas in the gas network with hydrogen would go a long way to reducing UK carbon emissions. But only if we stop using grey and brown hydrogen.

Hydrogen boilers aren't yet available to buy but Worcester Bosch and Baxi have both developed the technology. They're also calling for all gas boilers installed from 2025 to be hydrogen-ready.

While there's still no clear path to a low-carbon future for home heating there's a chance that your next boiler could run on hydrogen.