The race is on for heating brands to become hydrogen boiler manufacturers.

Hydrogen looks set to play a big part in the future of home heating. It’s a cleaner alternative to burning natural gas as it doesn’t emit carbon into the atmosphere – a leading cause of climate change. And it would allow us to continue using boilers.

Why boiler manufacturers are backing hydrogen

Gas boilers have been the heating system of choice for many years. More than 20 million UK homes now have a gas boiler.

While natural gas is an effective way of heating our homes, it isn't kind to the environment. When burned, natural gas releases carbon into the atmosphere, a leading cause of climate change.

Our reliance on burning fossil fuels for heat now means that 74% of all building emissions and 23% of all UK emissions come from home heating. These numbers need to drop if we are to hit our carbon targets. And hydrogen could be the answer.

To ensure the vast majority of homes have a reliable and consistent supply of natural gas, they're connected to the gas network. The gas network is a series of pipes that delivers gas to a property as and when needed.

Reducing carbon emissions while making use of the extensive gas network would be an ideal solution. And this is why Worcester Bosch and Baxi are pushing for hydrogen.

The earliest we’re likely to see hydrogen added to the gas network (if this path is taken) is 2026. You can find out more about the possible role of hydrogen for home heating our guide to the Advantages and Disadvantages of Hydrogen Energy.

As there’s currently no hydrogen in the gas network, hydrogen-ready boilers aren't yet available to buy.

Baxi's parent company, BDR Thermea, have been at the forefront of hydrogen boiler technology for a number of years. Now Baxi are developing their very own hydrogen boiler.

The Baxi 100% hydrogen boiler will be available as a combi and system boiler with a modulating thermal output of 28 kW. While hydrogen boilers aren't yet on the market, Baxi are developing their model with the consumer in mind. Some of the features include:

Worcester Bosch unveiled their very first hydrogen boiler in November 2019. As one of the leading UK manufacturers of gas and oil boilers, Worcester Bosch are now working to find low carbon alternatives and have stated that all boilers installed from 2025 should be hydrogen-ready.

The Worcester Bosch hydrogen-ready boiler is an ideal solution moving forward as they can run on 100% natural gas. So, these boilers could still be in full working order whether the switch to hydrogen is made or not.

Can I buy a hydrogen boiler yet?

Hydrogen boilers aren't being manufactured for installation yet. This is because the UK gas network doesn't currently contain hydrogen.

There’s plenty of talk about hydrogen replacing gas but no decisions have so far been made. Until the UK commits to switching from natural gas to hydrogen, hydrogen-ready boilers won’t be available to buy.

However, most modern condensing boilers can run on a hydrogen blend. This is a mixture of 20% hydrogen with natural gas. Many boiler manufacturers are currently testing whether their boilers work with a hydrogen blend. And the following models have all been certified.

While hydrogen boilers aren't available to buy, the Vitovalor CHP from Viessmann is a fuel cell that generates heat and electricity which already makes use of hydrogen.

How much will a hydrogen boiler cost?

The leading boiler manufacturers have come together to state that hydrogen boilers will cost no more than the equivalent gas boiler.

So you could be paying anywhere between £500 and £3,000 for a hydrogen boiler depending on type of boiler, output rating and model.

While there are no 100% hydrogen-ready boilers on the market yet, you can get one that’s certified to run on a hydrogen blend. Below we take a look at how much they cost before installation.

You can compare the boilers by these manufacturers using our Boiler Comparison Tool:


If it's time to replace your current boiler, use our free service to get quotes now.

Is hydrogen the future of home heating?

As of 2020, natural gas is by far the most common type of heating system for UK homes. Around 85% of properties now rely on natural gas.

With so many properties burning gas to heat their homes, adding hydrogen to the gas network would help to lower the carbon emissions that are the result of home heating. 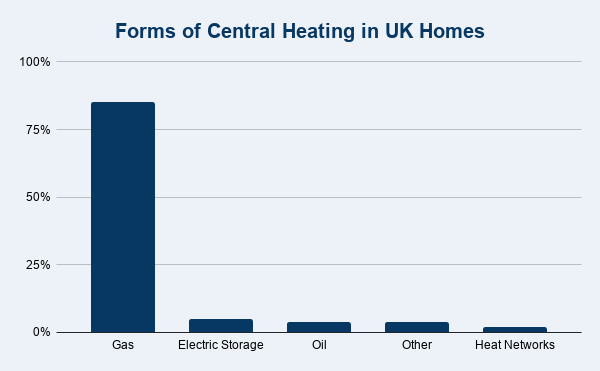 Hydrogen isn't the only answer to lowering the carbon emissions from home heating. However, with such an extensive pipe network connected to millions of homes, it could certainly be the least expensive and most practical.

Plus, the UK government is currently in the process of replacing mains gas pipes with polythene, a material that is perfect for hydrogen gas – this project is due to be completed in 2032.

Find out if hydrogen boilers could replace gas boilers in our article Hydrogen Boilers: An Alternative to Gas Central Heating?

What are the possible alternatives to hydrogen?

Hydrogen isn't the only low-carbon solution for heating our homes. A number of renewable heating systems are already available and The Committee on Climate Change (CCC) believes that heat pumps could be the key.

There are two forms of heat pump: air source and ground source. Air source heat pumps extract heat from outside air (even during the winter) to provide central heating. Meanwhile, ground source heat pumps circulate liquid through underground pipes. This liquid is heated by the ground where temperatures sit at a constant 10-15°C all year round.

While heat pumps would help to reduce the carbon footprint of UK homes, they're a challenge to install into existing properties (retrofit). With gas boilers being banned from new build homes as of 2025, heat pumps are a likely replacement. However, with more than 20 million homes already using a gas boiler, installing heat pumps would be expensive, impractical and in some cases impossible. For these properties, a low-carbon fuel could replace the natural gas circulating around the netowrk. And that's why a number of boiler manufacturers are preparing for a hydrogen future.

When could hydrogen be heating our homes?

Hydrogen boiler manufacturers Worcester Bosch and Baxi are calling for all boilers to be hydrogen compatible as of 2025. But based on government consultations, the earliest possible date for adding hydrogen to the gas network would be 2026.

All this being said, there hasn't yet been a commitment to adding hydrogen to the gas network. So while we're seeing a rise in the number of hydrogen boiler manufacturers, there's a chance that it might not happen.

Get a clearer idea of the future of hydrogen by taking a look at the hydrogen timeline.

Using Boiler Guide, you can get free quotes from local Gas Safe registered engineers. Simply take a few moments to complete our online form and you’ll hear from up to 3 installers. Each will provide a free quote for you to then compare and be confident that you’re getting the most competitive deal.


If it's time to replace your current boiler, use our free service to get quotes now.