For off-grid homes, the choice of heating system comes down to either oil or LPG. Oil and LPG boilers are both effective heating systems that can perform as efficiently as natural gas.

If your property is connected to the gas grid then it will be cheaper and more environmentally friendly to have a gas boiler installed.

What’s the difference between oil and LPG?

Oil and LPG are both liquid fossil fuels that can be stored in a tank in your garden. They’re delivered to your property by a supplier and stored in an external tank. Your boiler will then burn the fuel to provide heating and hot water. And that’s where the similarities between oil and LPG end.

Heating oil is a form of kerosene produced through the heating of crude oil. Meanwhile, LPG is a colourless hydrocarbon gas which has been pressured into a liquid form. It can be extracted from natural gas streams or petroleum but is usually collected as a byproduct of the crude oil refinery process.

There are 2 types of LPG: butane and propane. Butane is usually used in indoor heating systems as it has a higher boiling point.

An oil or LPG combi boiler would be a great heating option for off-grid homes with 1-2 bathrooms. To find out which fuel is best for your home, we’ve weighed up oil and LPG prices as well as the pros and cons. 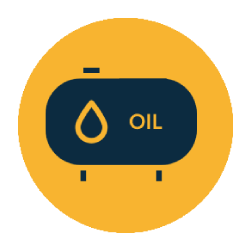 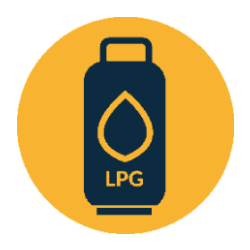 The best LPG combi boilers are manufactured by ATAG, Baxi, Ideal, Vaillant and Worcester Bosch. A wide range of output ratings are offered by these manufacturers which will make it easier to find a suitable system for the heating demands of your home. Plus, extensive warranties are offered by all of these boiler brands.

An oil combi boiler is likely to be higher than an LPG combi boiler. However, prices can range quite significantly depending on the manufacturer and model.

In addition to the boiler, a tank will be needed to store the fuel. Storage tanks are commonly installed above ground on a stand but underground options are also available. Oil storage tanks are priced between £500 and £2,800 depending on size and whether installation is above or underground.

As well as the upfront installation costs, you will also need to consider the running costs.

Fuel cost prices are measured in pence per kilowatt-hour (kWh). This essentially means how much it will cost to heat your home for an hour. Natural gas is the cheapest fuel, followed by oil (4.81p/kWh) and the LPG (7.19p/kWh).

In terms of running costs, oil is a more affordable way to heat your home than LPG.

Using the price of the fuel per kWh, we can estimate how much it will cost to heat a home for a year depending on their average energy usage.

For a more precise estimate of how much burning oil or LPG could cost to heat your home, multiply the average price of the fuel per kilowatt-hour by your annual usage in kWh (this can be found on your heating bill).

Suppliers of oil include Boiler Juice, Rix and Crown Oil. LPG can be supplied by Calor Gas, Flo Gas and AvantiGas.

Should you switch from oil to LPG?

Oil has been the go-to fuel for off-grid properties for a number of years. However, there’s increased concern about the impact burning oil is having on the environment.

While oil and LPG are both fossil fuels that emit carbon into the atmosphere when burned (a leading cause of climate change), LPG is considered the cleaner of the two. It’s also cleaner in the sense that less soot and ash is left behind after burning.

In addition to its environmental credentials, LPG boilers are far more affordable and cost less to install. Fuel storage can also be more compact and the fuel itself can be used for the stove as well as the boiler.

A planned switch from oil to LPG does need some consideration though as:

If you’re particularly concerned about your impact on the environment then you may want to rule out oil and LPG altogether. And instead opt for a renewable heating system.

Rather than burning fossil fuels – like oil and LPG combi boilers – a renewable heating system fuels your central heating using sustainable sources of energy. These sustainable energy sources can include plant-based organisms (like wood), the air, underground heat and the sun.

Heating your home with renewable energy can lower your heating bills and reduce your carbon footprint. Not only that but you could also be entitled to receive payments for the heat being generated through the Renewable Heat Incentive.

Find out more about how renewables could be the Heating Systems of the Future.

Get quotes to supply and fit a new boiler now

If you're looking for boiler engineers in your area then you've come to the right place. Leave it to us to match your requirements with trusted & accredited professionals. We only work with the best. Get in touch today!