While Intergas boilers are extremely reliable appliances, should the worst happen this guide is here to take you through Intergas boiler problems and provide you with repair advice, so you know exactly what to do. Many common boiler problems don’t even need the expertise of a heating engineer but if one is needed (and if in doubt always get in touch with an engineer), you can get free boiler repair quotes using Boiler Guide. 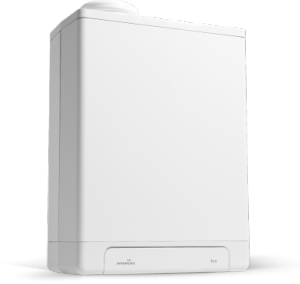 A sudden drop in pressure could indicate a leak in the system, which can cause damage to components within the boiler, not to mention your home. If there’s any indication of water leaking, then you’ll need to hire a Gas Safe registered engineer to fix it before the pressure can be increased.

Once the leak has been fixed, if there was one, it’s possible to increase boiler pressure yourself by following the steps in our guide to low boiler pressure. If in any doubt though, don’t hesitate to contact a professional.

A frozen condensate pipe can occur during the colder months as this pipe leads outdoors to a drain to dispose of acidic water. When the condensate pipe freezes, it can cause a blockage which will prevent the boiler for working.

If your condensate pipe has frozen, you might want to try thawing it out yourself, which you can do using our tutorial. If you feel unsafe doing so you should call out a Gas Safe registered engineer.

An boiler that’s overheating can eventually lead to some serious damage if left. Fortunately, the fix is fairly simple and something you can do without hiring a Gas Safe registered engineer.

Air in the system is one of the most common reasons for a boiler overheating. In the same way as a physical blockage, air in the system, or ‘airlocks’, can prevent water from circulating around the heating system. To remove this air, you can either hire a heating engineer to bleed your radiators or follow steps to bleeding a radiator yourself.

When you make a demand for heating or hot water, the PCB will tell the gas valve to open which will provide gas to ignite the flame. When the 4 error code appears, it means that the PCB is unable to detect whether this process will happen.

Fixing no flame on an Intergas boiler

Seeing the Intergas 4 error code isn’t a simple one to resolve and you should never attempt to fix it yourself. In this case, the issue could lie with the flame sensor or gas valve. Depending on the issue the heating engineer might be able to repair them but there’s a chance they could need replacing altogether.

When you turn the hot water tap or put the heating on, a flame ignites to heat up the water. When this happens a flame sensor tells the printed circuit board (PCB), which is effectively the ‘brain’ of the boiler, that the flame is working.

So, the flame could either be lighting but going undetected or it might not be igniting at all.

There are many reasons why you could be seeing the Intergas error code 6, all of which should be looked into by a Gas Safe registered engineer:

The only exception to this is if the condensate pipe has frozen, causing a blockage. This is most likely after a period of freezing cold weather and you can find out how to fix at number 2 in our list of Intergas boiler problems.

6. Radiators not heating up

Your radiators not heating up can be down to a number of reasons, but the two most common are sludge or air build-up in the system and unequal distribution of heat. If only the bottom of your radiator is getting hot, you may need to bleed it.

Bleeding a radiator is fairly straightforward and our guide to bleeding radiators can take a you through the steps. If you don’t feel safe bleeding the radiators yourself then you should contact an engineer.

Any strange noises you hear coming from your boiler tends to be caused by air in the system or it’s kettling.

If there’s too much air in the system, you’ll be able to tell because your radiators won’t heat up properly. To clear the air, you will need to bleed the radiators. Kettling is the term used to describe a sound resembling a boiling kettle coming from the pipes. This happens when sludge, limescale and other debris builds up, blocking the water, causing it to boil, steam and whistle like a kettle. Removing this build-up requires a heating engineer to perform a powerflush.

To find the cause of your noisy boiler, use our guide to central heating noises.

Not all boiler problems will need the trained eye of an engineer and can be done yourself, use the table below to know when you should be contacting an engineer.

So that you know there’s a fault with your Intergas boiler, an error code will display on the screen, to know exactly what it means take a look at our list of Intergas error codes.

Should You Replace Your Intergas Boiler Instead?

Have you had your Intergas boiler for quite a few years? If you have, potential savings of £305* a year in a detached home may make you want to think about getting a new one. Take a look at the table below to see how much you could be saving depending on your current boiler rating and property.

Who Should You Choose to Replace an Intergas Boiler?

If you like the sound of a new boiler then you need to choose who to replace it, which can be a big decision. In the end, your choice will come down to either a local engineer or a national company.

Local engineers can offer very competitive rates and you’ll be getting a very personal service from the same person throughout your communications. To make sure you’re getting the best deal, it’s a good idea to get a quote from more than 1 engineer, we recommend getting up to 3.

National companies may end up costing you a little bit more but it could be worth it as big brand protection is a huge bonus. They will also be able to offer extra services such as ongoing boiler cover.

When your warranty has come to an end you might want to consider covering your boiler with boiler insurance. You can easily take this out with your energy supplier but there’s no obligation to do so. When comparing boiler insurance, the best ones will offer and annual service and safety inspections.

As standard, Intergas boilers come with a 12 month warranty but depending on the model you have installed the warranty can extend from 3-10 years. Take a read of our complete guide to Intergas warranties to find out even more about what they offer. A boiler warranty is well worth having as you’re covered should anything go wrong so keep it valid by arranging an annual Intergas boiler service by a Gas Safe engineer.

Send us an enquiry today to receive free quotes for a new boiler and find trusted engineers near you with our free service.

*According to the latest figures from the Energy Saving Trust


Get quotes to supply and fit a new Intergas boiler now